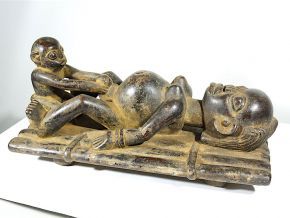 Maternal death rate could be growing in Cameroon

Some people claim that figures from the minister of health confirm that maternal death rate is growing.

For some months now, numerous cases of young mothers’ deaths are mentioned in social media groups leaving the impression that maternal death rate, instead of decreasing, is going up. This is not false at all. According to the figures revealed by Cameroon’s minister of health, Andre Mama Fouda, during a cabinet meeting last October 26, almost 6000 women die every year in Cameroon while giving birth. Maternal mortality rate rose from 430 mothers’ deaths for every 100,000 births in 1998 to 782 deaths for the same number of births in 2011.

However, neonatal and infant-juvenile death rate declined slightly from 37 deaths per 1,000 births in 1998 to 28 in 2014. Furthermore, 22,000 new-born babies die every year; around 61 per day. These figures are the result of the evaluation of the national program to combat maternal, neonatal and infant deaths.

Many factors can justify the increase in maternal deaths. They are notably, direct causes related to bleedings, infection, and eclampsia, obstructive labor, and clandestine abortion. There are also indirect causes including aggravated diseases like malaria, AIDS, anemia and socio-economic factors (ignorance, weak health systems, culture and poverty, high costs of hospital bills, poor quality of obstetric and gynecological care and lack of qualified midwives).

Cameroon’s government hopes to reduce, by 2018, maternal mortality rate by 25% through its strategic agenda to combat against maternal, neonatal, and infant-juvenile deaths and a contribution scheme for pregnant women health coverage.