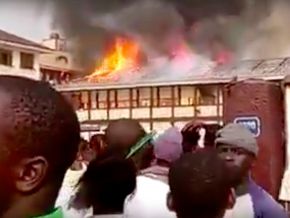 Has there been an arson at Sacré Cœur School in New-Bell?

Rumors compare this fire to those in the Northwest and Southwest.

At about 5 PM, a fire broke out at Sacrée Cœur School in New-Bell, Douala II.

Unlike what is being said on social media, it is not an arson.  Didier Bidja, the subprefect of Douala II cleared the doubt in a quote published by the website of Radio Balafon. It would have been caused by a young intern who accidentally manipulated kerosene in one of the dormitories.

Many media also claim that the fire has consumed the entire school or the administration. But no, only the second dormitory, in front of the sports ground, specifically reserved for girls has been heavily damaged.

The roof which has been completely burned and important material losses inside the dormitory are the noticeable damages.

The official account has not yet been disclosed, however.