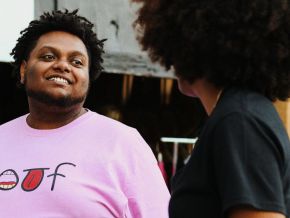 Does the insult MOUF really originate from the English language?

It is said that the famous Cameroonian French-English interjection comes from Shakespeare’s language. True?

Nobody knows how it spread throughout the country to the point of turning into one of the famous insults uttered by Cameroonians in general. To show contempt or annoyance, it is common here to say “MOUF!” when talking to someone. This word replaces the very meek “imbecile” or very French “casse-toi pauvre con! (go away numbskull)”. Where does this oft-used word come from? Like almost all pidgin words, it comes from English; precisely the word “MOVE” which is commonly used to mean “go away”. It is therefore the result of a cross between Cameroon and the UK; specifically, the cohabitation with British settlers during the pre-independence years.

In a collective book entitled Africa Meets Europe: Language Contact in West Africa (2004), linguistic experts Dr. George Echu (Yaoundé University) and Pr. Samuel Gyasi Obeng (Indiana Univerisity) make this claim. In their book, they explicitly mentioned that MOUF comes from MOVE. We can imagine that after hearing this word said by White people many times, our Cameroonian forefathers did not really understand much but easily guessed its meaning based on the tone used to say it.

It is a short version of “Move me there”. In pidgin-English, it is said as “mouf me dé”, points out Hilaire, a fifty-something man.

Today, to soften the blow of MOUF, variations such as “MAFF” or “MOF” are used; which can be said to an annoying close relation who is not mean. Singer Maahlox made this expression a refrain in his songs.