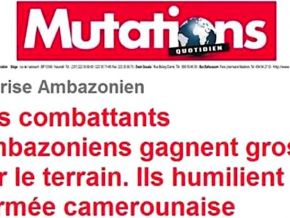 No, This is not the Frontpage of the August 1, 2018 edition of "Mutations"

The frontpage of the August 1, 2018 edition would not have praised Cameroonian secessionists.

"This morning, some malicious individuals decided to edit the frontpage of Mutations to suit their purpose and share the edited version on social media". This is the statement published on August 1, 2018, by Georges Alain Boyomo, the publishing director of  Mutations, one of the most read media in Cameroon.

Indeed, many people were surprised to see on social media, a version of the daily newspaper with presentations and titles somehow strange for a newspaper that is usually moderated in its news.

On that edited version, there are titles like: "une  La crise Ambazonien : les combattants Ambazoniens gagnent gros sur le terrain,   (The Ambazonian crisis: great victories for the Ambazonia fighters, they disgrace Cameroon's army)”. In the lead of that news, there is a list of companies targeted by the secessionists: Total, Adac, Brasseries du Cameroun, Bolloré, Delmonte. Two other news are also strange. The first one is   “Représailles : le taux de génocide chez les anglophones est alarmant (Retaliation: Alarmingly high number of victims among the Anglophone population).  The second one is “Paul Biya : le président malade, il peut mourir à tout moment” (Paul Biya sick: He can die at any given time).

Looking at those titles, readers who are used to the newspaper's style will notice that the physical presentation, as well as the writing style of this version, are different from that of the real newspaper.

The publishing director also informs that the real version of August 1, 2018, has been published and its frontpage announces the threat of textbook scarcity.