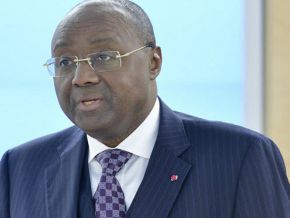 Has Pierre Moukoko Mbonjo really been a singer?

It is said that the former minister for foreign affairs was a professional musician. True?

Do not discuss his singing career with him; Pierre Moukoko Mbonjo (picture) clearly loathes it. The former minister of foreign affairs (2011-2015) erased every trail of his career as an artist. A record storekeeper we met in Yaoundé central post explained that the ex-minister destroyed all the disks in his name. "Peter Mukoko-son (the minister’s artist name) is a man I can not quite understand. A man who bought back all his disks to get them destroyed on the spot? I simply do not get it".

Thus, it is hard to hear the songs of the man who used to be called "Cousin Nyamsi", by the name of one of his famous songs. Indeed, in the 1980s, Peter Mukoko charmed music lovers with 33 and 45 rpm disks in the glory of ancient Makossa. "Ghislaine", "Cousin Nyamsi" are some famous songs of his musical legacy.

His entrance into politics in the 90s concealed this career which was promising new songs. Even if the ex-minister of communication (2004-2006) seems to have forgotten about this period, "discothèque de papa" will not; Youtube also with this relic: https://www.youtube.com/watch?v=2T7jsQIJKJg