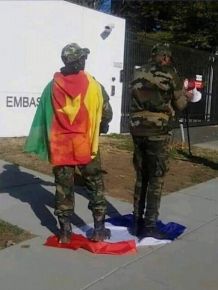 No, these Cameroonian soldiers are not trampling on France’s flag in reaction to what Emmanuel Macron recently said about Paul Biya

Cameroonian soldiers trampling on the French flag: this is what an image shared on social media over the past few days suggests.

A picture currently shared on social media shows two black soldiers with a Cameroonian flag trampling on the French flag. And people say the soldiers’ action is in response to what the French President Emmanuel Macron recently said about his Cameroonian counterpart.

Indeed during the Salon de l'Agriculture show held in Paris on February 22, Emmanuel Macron denounced “unbearable human rights violations” in the context of the ongoing Anglophone crisis in the northwest and southwest regions of Cameroon, and promised to “put pressure” on Paul Biya to put an end to this situation.

But the picture in question has nothing to do with this scenario. It does exist certainly, but it has been taken out of context. The men in the picture, although dressed in military uniforms, do not belong to the Cameroonian army corps. A reverse image search on Google found that the photo was taken in the context of the “desecration” of the French flag by “General El Che Nou,” a Cameroonian activist member of the Anti-Sardinian Brigade (BAS) opposed to the Yaoundé regime.

The scene took place in front of the French Embassy in Washington (USA). You can find some evidence here and in this video. Contrary to what some people claim, this photo dates back to November 2019.