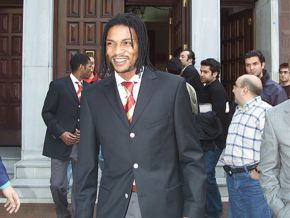 His passion for fashion suggests a possible past as a model. True?

For many observers who have a modicum of interest in fashion, “Captain-Courage” was a model; top model for the eulogists. Which is not exactly the case. Said rumour was amplified in 2007. That year, as he was playing for Galatassaray in Turkey, the emblematic defender of the national football team is crowned 7th best dressed football player in Europe by the magazine Champions de l’UEFA.

But he never worked as a professional model. That being said, Rigobert Song has never hidden his passion for fashion. Considering his stature (1m83) and his pronounced taste for branded clothing, he sometimes walked on the runway for charities or for fun.

He even launched his tracksuit line Rig-Song in 2007. Which sometimes provided the Indomitable Lions with suits, for some of their public group appearances. On the fringes of the Yaoundé fashion event K-Walk, to which he was invited, Rigobert Song talked about reviving his brand, today in stand-by.

While awaiting the full recovery of Captain-Courage from a cerebrovascular accident (stroke) which almost took him, he is the muse of the brand Tchakap, launched in 2014 by his nephew Alexandre Song.