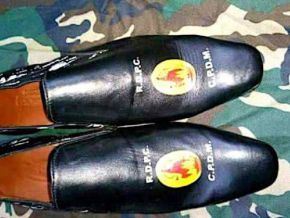 Are "RPDC" shoes currently sold on the local market?

As the next presidential elections, scheduled for 2018, are getting closer, each party seeks to be seen by potential voters. In this regard, an image depicting a pair of shoes bearing the logo of the Rassemblement du Peule Cameroonais (RPDC), the ruling party, is currently circulating on the internet. Some say that this unusual brand is manufactured in large quantities.

This is not true. There is no trace of any manufacturer for the unusual shoe. It is probably an over-zealous activist who paid a serigraph to put the party's logo on the pair of shoes.

Though in this case the information is fake, fact remains that communication tools such as local fabrics, caps, kaba ngondo (ample dress for women and girls), scarves and customized shoes are often used by parties for promotion-sake during the period of elections.