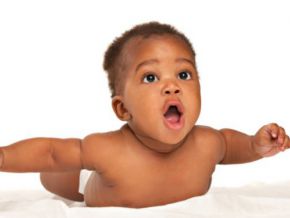 This became one of the habits of moms and grand mothers in the country.

It is impossible to ignore this old trick that consists in pulling a thread from the baby’s towel and placing it on its fontanel to stop hiccup in Cameroun. All those who have once been parents have heard or practiced this trick. Does this thread really stop the hiccup? Or is it maybe the contact between the thread and the fontanel? The fact remains that it sometimes works (pure coincidence?) and sometimes not.

The fontanel is a membrane between the bones of the baby’s skull. It helps the skull grow and reach it normal adult size. A hiccup however is an involuntary spasmodic contraction of the diaphragm which happens when the stomach, full of liquids or air, expands and stretches the major nerve in the diaphragm.

Painless but sometime awkward, it is frequent with children, babies particularly. It can last half an hour, or a full hour sometimes for toddlers.

There is no scientifically proven link between the fontanel and the thread but, some Cameroonian parents claim that a light stroke of the palm on the baby’s fontanel relieves and relaxes this one.