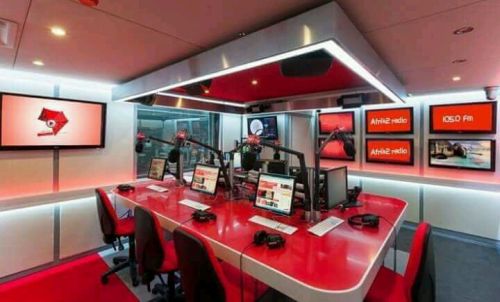 No, this picture does not feature Afrik 2 radio’s studio

A visit to the studio of Afrik 2 radio, at July Voyages building in Yaoundé, revealed that the place is abandoned. Dust and cobwebs are all over a tightly sealed door. The studio is closed for “unpaid rents. Wages were also unpaid” we learned from reliable source. Near the entrance, some of the studio equipment are just as dusty as since 10 months. This situation is way different from the picture shared on social networks a few days ago.

The image in question features a beautifully arranged set in a platinum red decor that will make one want to listen to the 105.Fm frequency. “It’s beautiful, but it's fake though,” said Francis Jamel Laplage, a former employee of this station.

In a Facebook post (later deleted), Francis Laplage said the image is indeed fake. Actually, it's a studio in England, the Heart radio studio. The faker changed the name “Heart” into “Afrik 2” letting people believe that the once-successful radio channel has relaunched activities. Let’s note that Afrik 2, founded by the journalist Polycarpe Essomba, started activities in October 2014.