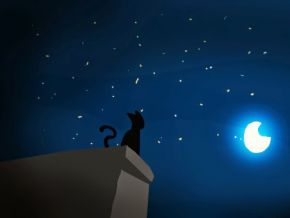 Are the nocturnal cries of a cat a bad omen?

Regardless of the ethnic group, Cameroonians view the long nocturnal mewing of cats as signs of a bad omen.

When people say that a cat is crying, they refer to the long melancholic meowing that this small fawn emits. For some people, it is a bad omen but for some, it is not.

For Rose, 31, it is not a simple superstition. “The deaths of my mother and that of my brother have been preceded by the cries of a cat at night”, she said with sadness. “I believe it because cats do not normally cry at night. And when it happens, it is inevitably a bad omen”, thinks Christelle, an inhabitant of Mbouda in West Cameroon.

However, some people like Jeanne d’Arc are skeptical. The middle-aged woman from Bassa ethnic group explains that most of the times, when a cat mews at night, it is to find its partner from the opposite sex for copulation. “Cats are like human beings.

Unlike dogs, they do not condone in incest. So, their nocturnal mewing are ultra-audible to invite the opposite sex which could be far. The cries of a cat could thus be a bad omen or not”, she said.

She adds that it could also be a bad omen if a dog bark at night. So, those who think that the nocturnal cries of a cat is bad omen can believe it if they want to.