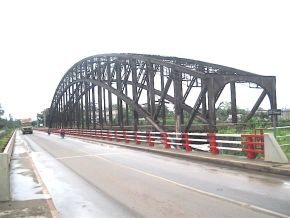 Is it true that there has been a terrorist attack in Edéa?

It is said that there was a terrorist attack at Edéa Bridge. True?

On Sunday, March 4, 2018, it is true, a soldier had shot into the air at Edéa Bridge. However, it was not a terrorist attack as rumors have it. According to a police source, it was an altercation between armed forces and a group of thugs who came from Douala to Edéa to avenge their friends.

Another credible source revealed that the altercation was between unidentified people (which according to some sources are motor taximen from Douala) and the soldiers who guard that the bridge. “They tried to take his gun from him so, he shot into the air to discourage them. Actually, five of the assailants have been arrested and are being interrogated”, said another source who required to remain anonymous.

The rumors of a terrorist attack sparked, following a report from Vision 4. Indeed, the channel reported that gunshots have been heard in Edéa on Sunday, March 4, 2018. “The checkpoint installed at the bridge has been attacked by unidentified individuals”, however, the channel later refuted the news. Later on, also, the prefect of Sanaga Maritime belied the rumors on CRTV.  “There was no attack", he said. The bridge is peaceful.