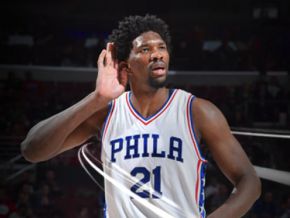 Rumors and even some media claim that the young Philadelphia 76ers center has chosen to play for his native country. True?

Part of the world’s basketball fans is expecting a word from Joël Embiid, the young Cameroonian who is Philadelphia 76ers center. They want to know if he will play for Cameroon or not. 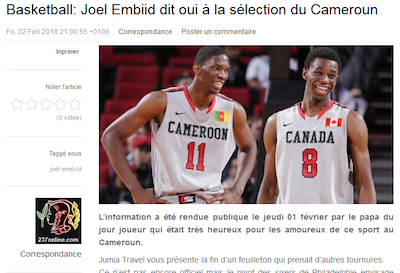 To that question, some people (even some media) claim that he will. They base the claim on the words of the player's father (who by the way is neither his manager, nor his spokesman). Yet, Joël Embiid , 24, has not yet decided. Even if his native country is his « prime choice », he is still considering between France, the United States and Cameroon.

“I have never said that I will play for France, I said that it was just an option. I must play for many years (without injuries) before I think of joining a national team. After that, it is complicated. I am from Cameroon but, there are many problems. They have to tend to them. I like my country, I am a patriot and I want to play for it. If I have to choose, Cameroon will be my prime choice, if there is a good environment, because I am from there. But, I won’t be the only one to decide at a point in time. My current team which has invested $150 million on me will also have its say. It is a lot of money to let their player go in an environment without a good medical care. So, my native country, France, and the United States are my current options. I just want a good management”, he said two weeks ago to the French sports website “l’equipe”

So, management and finance issues can limit the patriotic impulses of one of the best NBA players. Samuel Nduku, president of Cameroon’s basketball federation minimizes. “If by tomorrow, Cameroon wants to buy him, it will. France cannot have him in February or March. So, by the time he will be available for a national team, his choice will be Cameroon”, the president said to RMC, a French sports website

“You are talking about a country. There is not an assurance problem for us. As for me, it is not so much a debate. If at the right moment there is a problem of assurance, there is nothing more than the home country and Cameroon will take its responsibility”, he added. So, the choice of Embiid is still on the standby.