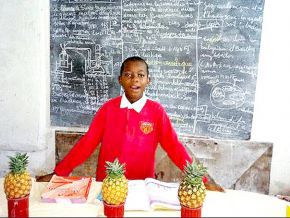 Though he failed at the first turn, it is said that the boy's family sent a request to the Baccalaureate Office of Cameroon to contest his results.

The rumor was being spread on social networks since last Sunday, September 3: Jean-Pierre Essombe Mabingo, 10-year old genius has passed the 2017 probationary exam. This is after a request sent to the Cameroon Baccalaureate Office (OBC). The boy, who is in the second year of high school offering a science course, was indeed found by TV channel Equinoxe and presented by many media.

Authorities of OBC do not know where this unfounded information spurred from, declared on Sept. 4 Urbain d’Assise Voula, who is in charge of OBC’s communication. The case of the young Jean-Pierre is very intriguing as he did not even submit any request to us but is said to have passed the exam on social networks. This rumor, if not contained, could negatively impact the kid who is getting ready to try the exam a second time, the official adds.

Urbain d’Assise Voula recalls that to contest results of the exam, a request must be sent to the OBC within a period of 15 days after the results are released.

The request must be approved by the director of the school of the claimant, an annual school report showing a score of 11, a FCFA50,000 fee repayable in the event the student decides not to go through the process anymore. This procedure was not initiated by Jean-Pierre Essombe Mabingo.