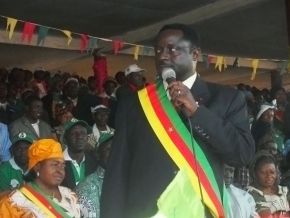 Is it true that one of the cars of the SDF deputy, Awudu Mbaya Cyprien, was recently stopped with heavy weapons on board?

According to social media posts, the drama took place in a north-western district.

The information is false but, it is the buzz in Cameroon right now. On October 5, 2017, there were social media posts which claimed that one of the cars of Awudu Mbaya Cyprian, a SDF deputy, was stopped with heavy weapons onboard.

Quite realistic, the scenario described in the posts states: “a 4x4 car which belongs to Hon. Awudu Mbaya Cyprian, SDF deputy and quaestor at the national assembly, was stopped yesterday at Nkambe in the north-western district of Cameroon. The said car, flagged with the assembly’s stockade, was loaded with heavy weapons. The car was requisitioned by the soldiers of the English speaking part of Cameroon for combat equipment’s supply. When the policemen who stopped the car called, and recorded the call, the deputy offered them CFA7 million to forget the case. For the time being, the driver and his accomplices are in custody.”

Col. Didier Badjeck, the defense ministry’s head of communication refuted the posts: “the information is wrong. Truly, we stopped a suspicious car, which belongs to the deputy, 2 kilometers from Nkambe. After identity checks, we released the car. This shows that Cameroon’s security forces do not arrest arbitrarily”.