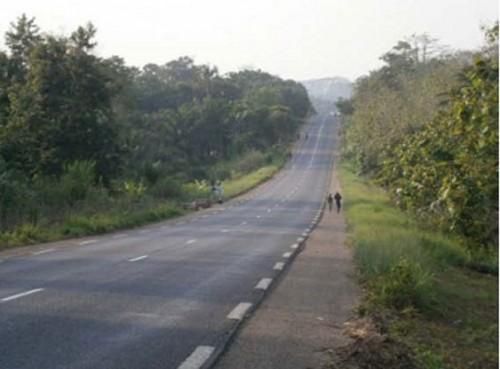 No, it does not take 48 hours to reach Bafoussam from Yaoundé!

It is said that two days are needed to reach Bafoussam from Yaoundé. Truly?

"From now on, 48 hours is needed to travel along the Bafoussam -Yaoundé (…) axis" a Facebook user posted last October. This post accompanied by a video in which two buses of the transport company "Général voyage", and other cars are seen hardly advancing on a narrow and muddy road and bifurcating, had been shared many times.

"This is false", Yvan Oyono, one of the users used to that road said to us. "Even though my last trip along this road was last October 12, it did not take me 48 hours to reach Bafoussam but 5 and a half hours. Along the road, there is a detour after Bafia. It is long enough, diverted from the central axis and led us to a really dented road. I did not see jams there", he continued.

H. Mundi, another user who used that road on November 2, 2018, confirms this testimony. "The said detour is located between Makenene and Yaoundé. It does not create jams but it considerably slows the traffic. Before, with public transports, it used to take between 4 and 5 hours to go to Bafoussam from Yaoundé, if we account for the different tolls and checkpoints that have multiplied because of the country’s security situation. Now, 2 hours need to be added to that time. It took me 6 hours last time" , Mundi said.

If there are detours, it is because of the project for the renovation of Yaoundé-Bafoussam-Babadjou road (on Nationale N°4). This project is part of phase 2 of the support programme of the transport sector which is divided into 3 sections. The first is Yaoundé-Ebebda-Kalong, 63.5 kilometers which includes the construction of an interchange at the place called carrefour-Obala (awarded to CGCOC GROUP, a Chinese company). The second part is  Kalong-Tonga (67 km, attributed to SINOHYDRO, a Chinese company) and the third part is Tonga-Bafoussam-Babadjou 110.242 km.

Up to June 2018, there were still issues with the renovation of the third part. At the time, the ministry of public works announced the replacement of  China Railway N°5 Engineering Group CO.LTD, which won the contract but was not ready, with ESCB Sarl.

The construction period of this part was then set to six months, an urgent measure taken by the project manager in view of the implication of Bafoussam in the organization of 2019 AFCON (Bafoussam should host group F matches).

The renovation of Yaoundé-Bafoussam-Babadjou axis is part of a vast project evaluated at about XAF145 billion.