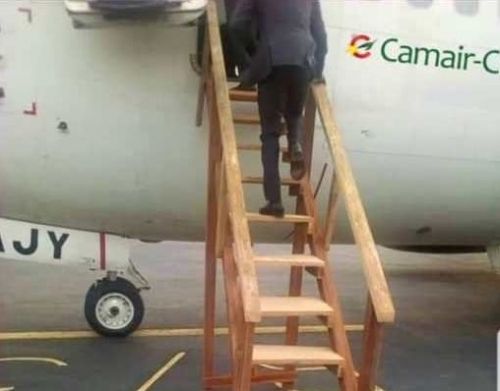 No, this picture showing a Camair-Co plane with a wooden airstair is not authentic

A post that went viral shows passengers boarding one of the state-owned aircraft on wooden airstairs. Really?

An image went viral on social media, showing passengers climbing a wooden airstair to board a Cameroon Airlines Corporation (Camair-Co) plane, Cameroon's state-owned carrier. “This is an example of the adaptation of customer service to Cameroonian standards with Camair-Co,” a user posted on Facebook, on January 4.

In fact, the image has been edited to add the name of the company on the fuselage of the aircraft. Usually, the Camair-Co logo is found on the front side of the plane just before the door. Then follows the name of the company, in a larger font than the one used on the edited picture. The company's slogan, “L’étoile du Cameroun,” is written below the Camair-Co name, precisely under “Camair”, which is not the case in this picture. All these details point out that the picture is edited.

After much research, we found the same picture on the Internet, but with no inscription on the fuselage of the plane. The image was first published on August 4, 2019, on Facebook by online media Afribuzz Media. The publication states that the photo was taken in Congo. In another image, a man is seen taking the same wooden airstair, the writing “Télé Congo” stamped on his vest and a camera on his right shoulder.