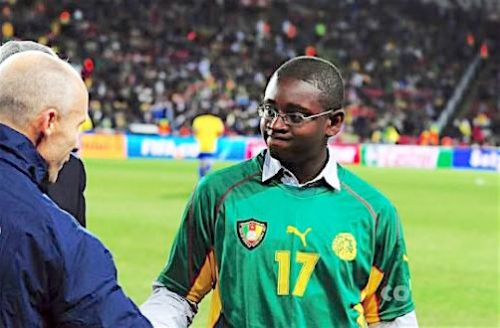 It is said that the late Cameroonian footballer’s first born has been condemned because he assaulted a priest. True?

The sentence was pronounced on June 6, 2018, at Lyon in France. Marc-Scott Foe, 22, was sentenced to 5 years imprisonment for armed robbery and sequestration on a priest. The eldest of the late Cameroonian player Marc-Vivien Foe’s three children was on trial since June 4, 2018. His accomplice Sofiane Bardot, 20, got the same sentence for a crime both committed on November 28, 2015.

French media report that they went to a Presbyterian in the Rhônes, looking for a safe. While Sofiane Bardot was looking for that safe, Marc-Scott Foe cuffed the priest Luc Biquez and beat him.

According to Eurosport.fr, they brutalized the priest for about an hour and a half and took to their heels when an alarm sounded.

Without the priest’s pardon at the court, they could have been condemned to 8 years for Foe and 12 years for Bardot.

According to Foe’s lawyer, his dad’s death, on June 26, 2003, when he was only 7 years old greatly affected the now 22-year-old man. Indeed, Marc Vivien Foe was playing the semifinal of the cup of confederation when he was stricken down by a heart attack. The whole world was saddened by this death and now, this sentence brings back memories.