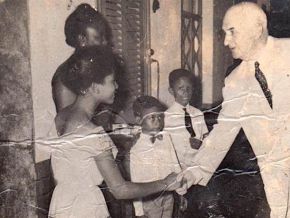 It appears that the first black stewardess was a Cameroonian

It is said that she attended her first flight in 1957 at UAT.

Granddaughter of Rudolphe Douala Manga Bell, Léopoldine was born and lived in Cameroon until 1956, when she finished her secondary high school and was recruited at the age of 17 by the Union aéromaritime de transport (Aeromaritime Transport Union), a former French airline.

While working for this company, she attended a flight training course in Paris provided by Air France. In 1957, as she turns 18, she was on her first flight, a year before Ruth Carol Taylor, the first black American flight stewardess.

After flying for 12 years, she retired at 30. She suffered racism, harassment and prejudice because of her gender and skin complexion. She will however continue to work as an airport manager, consultant and volunteer for various public and private airlines and travel agencies in Africa and the United States.

In 2015, Léopoldine Smith is honored on the 40th anniversary of the Black Flight Attendants of America, at the Los Angeles Flight Path Learning Center & Museum.