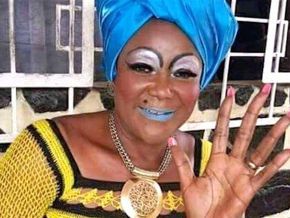 No, Mama Nguea has not married a young man…

It is said that the author of “Soleil de décembre” has married a man her son’s age.

His name is Samuel Frepper and, actually, he is being insulted by internet users. He is being called gigolo and bad things are being said of him because he is said to have married Nguea Laroute, the Cameroonian singer fondly called “Mama Nguea”.

But no, despite the images which suggest this, Mama Nguea and Frepper are neither engaged nor married. “It is a pitiful bad buzz. We notice that showbiz in Cameroon is actually in show buzz mode”, regrets Emmanuel Bidjecke, manager of many singers.

He reveals that Frepper has been one of Mama Nguea’s dancers and later sang many songs which did recorded little success. We can understand why this buzz pleases the "spiritual son" of Nguea Laroute, because he is taking this opportunity to promote his single “Zéro macabo”. A title which gives an idea of what is being discussed...