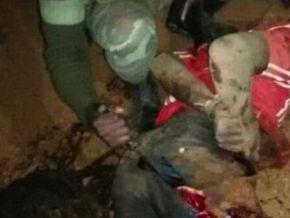 Are the soldiers shown on those images Cameroonians?

Since February 7th 2018, the armed forces of Cameroon were condemned by some internet users. The reasons for this are unbearable pictures of men in military uniforms mutilating dead bodies. Some people didn’t even hesitate to claim that the dead were from the English speaking regions, the Norwest and Southwest, that have been troubled by social and political tensions since October 2016. 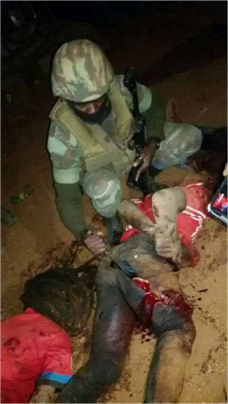 Col. Didier Badjeck, communication manager at the ministry of defense, denied the rumors. “These images are shared on internet to discredit Cameroon’s armed forces. Ignominious procedures used by bandits who apart from being murderers are also cybercriminals. Such practices are not condoned by Cameroon’s armed forces. So, don’t believe it”, he said.

“We know the exact place where these images have been shot but we can’t disclose it due to respect for the country which has gone through difficult times”, he added.

However, he invited people to compare the uniforms on the picture with the Country’s uniform. “The uniform is different from that of Cameroon’s army. Our army has a specific dress code”, he said, without going further to avoid violating the secrecy of the  defense code.