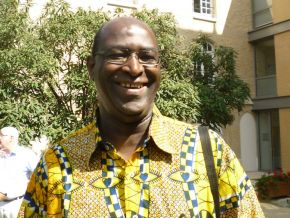 Did Berlin Criminal police communicate on the motives for the murder of Father Alain-Florent Gandoulou?

Still, some news websites claim that the priest tried to rape his murderer.

Late on February 22, 2018, father Alain-Florent Gandoulou, chaplain of the French parish in Berlin West was murdered by a man he sheltered in the Presbyterian. About 22 hours after the priest’s remains were discovered, a spokesman of the Berlin criminal police revealed that a 26 year old Cameroonian had been arrested in connection with the crime. He was arrested in an attic in Berlin-Reinickendorf. On February 25, he was sent to a mental asylum.

Some websites claim that the alleged killer’s motive was that the priest tried to rape him. Some others said that it is connected to the political tension in DR Congo and that it was organized by Congo’s embassy in Germany. All these assumptions are false because till now, the criminal department has not stated the motives for this crime.

The only information provided by the authorities is that a violent dispute arose in the offices of this chaplain. Someone called the police. When they came at about 11PM, they discovered the 54 year old priest’s lifeless body. The autopsy revealed that he was murdered.

According to the Catholic Archdiocese in Berlin, Alain-Florent Gandoulou was born on August 11, 1963 in Brazzaville (Congo). In 1991, he was ordainned a priest. A requieme mass has been organised for his memeory on March 2, 2018 at 6PM at Saint Thomas d’Aquin à Berlin.