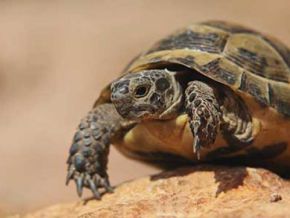 Is it true that the Bafia are scared of tortoises?

It is said that natives from this area in the country do not eat the shell-covered animal. True?

Just try to praise succulent meals made with tortoise meat to a Bafia. He will look at you like a mouse in front of a telly. Do not be surprised either if he runs away from you or fears you. This is because turtles, for a person from the Bafia or Mbam tribe in general (people from the Mbam-et-Inoubou district, in the Central region), are sacred animals. They must not be eaten cooked or raw.

Legend has it that a long gone Bafia ancestor was saved by a turtle. Chased by a fearsome enemy, this forefather found himself in front of a deep water body. It was on the shell of a turtle that he managed to escape his pursuers.

In his book La tortue chez les Bafia du Cameroun : mythes, représentations et symboles (Turtles in the Bafia culture in Cameroon: Myths, representations and symbols), published by Editions L’Harmattan in 2010, Joseph DONG’AROGA, a native Bafia, has some enlightening explanations on this topic. We can learn that the idea of worshipping tortoises indeed comes from their ancestors: the Nyokon.

Drowning under countless disputes, the latter cut a turtle in two in the middle of a road; this, after many incantations. The tortoise later became the totem of this people; and above all a symbol of justice and happiness. If a Bafia meets a turtle on the road, he knows that he is in luck...

In the above-mentioned book, Joseph DONG’AROGA talks about his childhood, marked by the repeated question from his boarding school mates: Why do you fear turtles? “Silence was the answer to this question from our mates, recalls the author. Or at most, we shrugged. The answer was in us, it was us. We were born and raised in a culture in which turtles were worshipped, feared. The answer to the question “why” was greater than us. We knew tortoises were dangerous animals because our parents told us so, and they were instructed on this themselves by our grandparents. But this knowledge could not be spoken about”. So that's that.