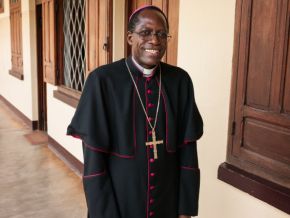 No, the catholic church did not forget the death of Mgr Benoît Bala

A year after the death of Mgr Benoît Bala, the Catholic church is still interested in knowing the circumstances of his death.

On June 2, 2018, during the commemoration of Mgr Jean Marie Benoît Bala’s death, at Sanaga river,  Emmanuel Kleda, Douala archbishop indicated that they could not forget the priest.

“We cannot forget our brother Mgr Jean Marie Benoit Bala who left us in troubling circumstances (…) We want to know the truth”, he said in a statement reported by La Croix Africa, a religious news website.

The archbishop reminded that as of May 30, 2017, Mgr Bala, bishop of Bafia, was missing. Three days later, his body was recovered from Sanaga river.

On June 2, 2017, the attorney general of the court in the central region announced that an official investigation has been launched for suspicious death. However, after a second autopsy conducted by the German doctors sent by INTERPOL, he declared that death by drowning is the probable cause of the bishop’s death.

On July 11, 2017, Mgr Samuel Kleda, president of the episcopal conference, issued a statement refuting the conclusion. That same month, they filed a complaint against an unnamed individual for murder.

To commemorate the priest’s death, the Bafia diocese organized a novena which was concluded by a mass at St Sébastien in Bafia on June 1. The following day, some Christians celebrated a mass where the man’s body was discovered and they threw flowers in the river in the man’s memory.