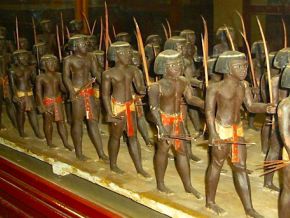 It is said that the Bamilékés are descended from Ancient Egypt

The works and studies of Egyptologist Moustapha Gadalla and the book “Histoire et anthropologie du peuple Bamiléké” (History and Anthropology of the Bamiléké) by Dieudonné Toukam in particular, are instrumental in establishing a link between the Baladis of Egypt and the Bamilékés. Additionally, linguistic comparisons also support the oral tradition on the path of the Bamilékés during their migrations from the banks of the Nile in the IX century to Tikar territory by mid-XII century.

History has it that around 1360, the Bamilékés split up after the death of their last sole ruler, King Ndéh. At the time, they still used one single language.

Yendé, the first prince, refused the throne and crossed the Noun to found Bafoussam. His sister went towards the Banso region in the Anglophone North-West. Two decades later, Ncharé (MNSARE), their youngest brother, came to the Noun plain to found the Bamoun country.