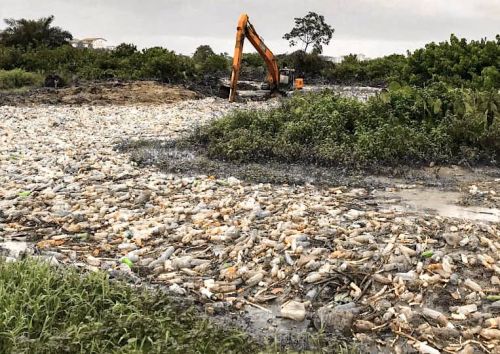 Yes, this picture was taken in Douala

The photo was indeed taken in Douala. It was first published on July 3 at 2:19 pm by Naomi Dinamona, co-founder of a Cameroonian company, specialized in electrical energy management and automation.

“Hello, this is not a picture from Google. This is a picture I took this morning (July 3, ed) on my way to work with a very heavy heart. Hoping that one day, the inhabitants of Douala in particular will become aware of the danger of throwing garbage on the way,” she captioned the picture.

When reached by Stopblablacam, the lady said she took the picture at “Makepe hood, on the Marie Lumière Bridge, just before the Ndogbong district,” in the 5th district of Douala.

Plastic bottles polluting rivers are common in major cities, including Douala and Yaoundé.