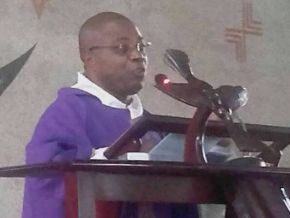 Has Msgr. Joseph Akonga Essomba really been aggressed at his residence?

It is said that this priest who gave an explosive speech targeting the alledged murderers of his pair, Benoît Bala, was agressed by masked men. Is it true?

Many know Msgr Joseph Akonga Essomba for the explosive and memorable address he pronounced against the “enemies of the Catholic Church” during the service that followed the funeral ceremony of his pair, Jean Marie Benoît Bala.

Giving his stature, it is well understandable that social networks users across the country would boil up after learning that “Msgr. Akonga Essomba, Vicar General of the Yaounde archidiocese (somehow the number two after the Head Bishop) was aggressed in the night of August 3 to 4, at his residence, by unidentified men”.

This is false. The general secretary of the national Bishop conference of lives peacefully at his presbytery.

In a phone interview with cameroon-info.net, Msgr Joseph Akonga Essomba denied the rumor regarding a so-called aggression. “Though he feels, like all his pairs, that the clergy in Cameroon is persecuted by evil and dark forces, he reassures all those who worry for his sake that he is well and fit,” the website indicates.