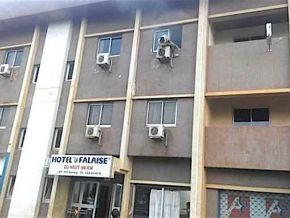 It is said that a man committed suicide falling off a hotel roof in Bafang?

It is rumoured that the suicidal person is actually in the morgue following a fatal fall. True?

The village of Bafang, in the Western region, is currently on the alert. During last Monday morning, an employee of the hotel La Falaise, jumped from the top of this hotel establishment of about 10 metres high. He was demanding from the director of the hotel, FCfa 6.5 million for various unpaid services. It was rumoured that the suicidal man died on the spot. This is false.

The unfortunate fifty-something year old is currently in intensive care in Banka Ad Lucem hospital (also in the town of Bafang). According to reliable security sources, steps have been taken by the authorities in the town to have him evacuated to Yaoundé. Negotiations are dragging between family members and delaying this operation.

An eye witness of the scene on Monday relates that the man climbed onto the roof of the hotel, with a container of petrol in hand; threatening to burn the building. The ensuing rain dampened his momentum.

With this, the population ran in, the fire fighters and administrative authorities as well. In spite of the assurances of the hotel management, the man suddenly panicked and fell. The onlookers scattered. The unfortunate man was finally taken to Banka Ad Lucem hospital.

The director of the hotel La Falaise, Pascal Monkam, announced a press conference to clarify the facts. An initiative which obviously aims at restoring the reputation of his hotel.