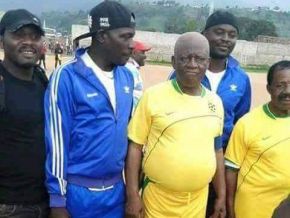 Is it really John Fru Ndi in this picture?

It seems that the picture was shot during a football game he played. True?

Some people think that the stomach of Paa’Fru was maliciously rounded in this picture but no. It is real.

According to a member of the Social Democratic Front’ s communication department, this picture was shot during the commemoration of the 25th anniversary of the main opposition party in Cameroon in May 2015.

The man, 76, was the captain during a friendly football game; a way to remind that he has been the party’s president since it was created in 1990.