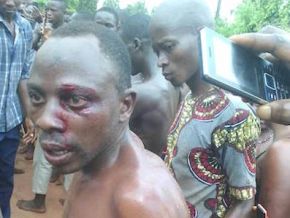 Many online posts claim so.

On Friday 6, 2018, a rumor according to which a gang of children's organ traffickers were dismantled in Cameroon, was spread. The information was extensively shared on social media and by some blogs. However, there was no precision on the police or military unit which operated nor was there an indication of the place and circumstances of the dismantling; only some horrifying pictures.

Unlike what is claimed, this did not happen in Cameroon. By the way, the pictures used were being shared on social media groups focused on West Africa early that week.

They were used to illustrate rumors about beninese cybercriminals, called gaymen, suspected of ritualism, who migrated to Togo.

After extensive research on internet, the images were found as the illustration of many articles of various information websites that had nothing to do with Cameroon. The websites are notably http://www.togo-online.co.uk, https://dailynigerian.com, https://www.flash221.com.

Each of those articles recounts different stories. One of them recounts the arrest of a native doctor at Ahepe in Togo on March 27, 2018. Another story recounts the killing of 45 Fulani children and women in Adamawa, Nigeria about 5 months ago. So, the images have nothing to do with Cameroon.