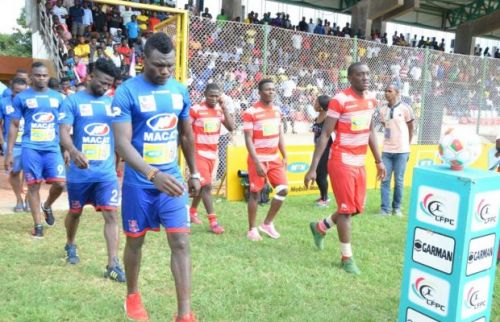 No, MTN Elite One and Two are no more suspended!

Some people only consider the first statement announcing the cancelation of the first and second division professional football championship in Cameroon. Are they right?

On July 6, 2018, a day after he announced the suspension of MTN Elite One and MTN Elite Two due to lack of funds, the president of Cameroon’s professional football league (Ligue de Football Professionnel du Cameroun-LFPC) Gen. Pierre Semengue published a note announcing the immediate resumption of these championships. This is because the country’s football federation FECAFOOT provided CFA45 million financing.

Yet, on July 5, 2018, at the end of a crisis meeting, he announced that the championships league would be suspended and the 30th day of MTN Elite One as well as the 25th day of MTN Elite Two initially planned for July 8 and July 10 respectively would be postponed to later dates.

Let’s note that the professional league’s financial problems were accrued in 2013 when MTN announced its withdrawal from the sponsors of the national professional football competition. Despite the telecommunication operator’s return, in 2017, with the status of exclusive sponsor and the occasional help provided by the government, LFPC is hardly able to guarantee its financial autonomy.