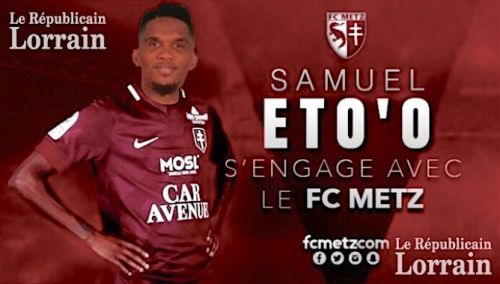 A rumor illustrated with edited pictures claims that Samuel Eto’o will play for Fc Metz. True?

For days now, many social media users have been haunted by only one question: has Samuel Eto’o Fils joined FC Metz? This question was raised because of a rumor which sparked on twitter, facebook and WhatsApp a while ago, claiming that the Cameroonian striker signed with FC Metz, the French first league team.

Well, this is not true!

One thing is for certain here and now: Samuel Eto'o Fils, whose deal with Konyasport expired as per the club’s announcement on its website on August 3, 2018, is free.

The rumors announcing the player’s arrival in Metz with articles and edited pictures are unsubstantiated. Besides, for the time being, the search bar on the FC Metz’s website displays no results for the keyword  “Samuel Eto’o fils”.

In addition, most of the authors of those posts that sparked the rumor are withdrawing their statements claiming that they were joking.

What is finally to be known is that the Cameroonian striker signed no deal with FC Metz but, he is not ruling out the possibility of playing in France. Questioned by a Twitter user during a question-answer game, Samuel Eto’o fils answers this: “why not? Anything is possible”.

To another user who questioned him about FC Metz, he did not belie the rumor but, his answer clearly shows that he is still free. His answer followed by a smiley read: “I will ask my agent”. An answer which should keep his fans waiting.

In the meantime, the only answer to the possibility of the former indomitable lions player joining the French club is this: only time will tell…