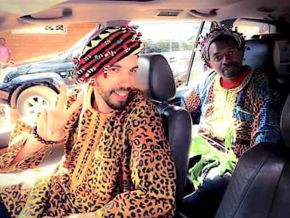 Were the members of X Maleya really elevated to the rank of Bamiléké dignitaries?

It is said that they received the symbols pertaining to this function, from the Chief of the Foto, in the Western region. True?

Several photos show Haïs, Auguste and Roger, wearing  clothes reserved for Bamiléké dignitaries. It is even said that the three members of the music group X Maleya were raised to the rank of dignitary in the Foto chieftainship, in the town of Dschang, Western region. They were certainly honoured on Saturday 6 May by the king of this traditional chieftainship, but their status of dignitary is only the one generally given to distinguished guests.

Because, when one talks of notables in Bamiléké country, it is in reference to the very select council of 9 dignitaries who surround the chief; or the council of chiefs. Which is not the case for our three singers. “The members of X Maleya are now comparable to princes in the Foto chieftainship. But their title does not grant them any responsibility vis-à-vis the Foto kingdom. They are, in a way, like ministers without portfolios”, informs Léonard Fandja, high dignitary in the Bantoubo chieftainship, in the Ndé district.

Actually, neither Haïs, nor Auguste or Roger are originally from the Western region, and even less from the Foto community. “That being said, if there is a meeting between Foto natives and the members of X Maleya arrive, they will be entitled to seats of choice, as they were honoured by the chief himself!”, explains Léonard Fandja. X Maleya was honoured in Dschang on the margins of the launch of their “campus tour”, which move to 7 other towns in the country.