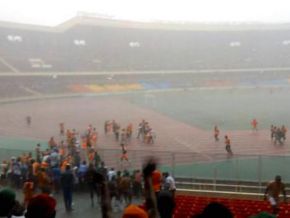 Is it true that rain can be prevented from falling?

Rain can be averted during major events by performing some rituals. True?

It may happen that you have organized a major outdoor event, maybe a wedding, a burial, a birthday, a football match, and rain comes ruining it all. When this happen, an elder could tell you that you should have thought of “blocking” the rain before going on organizing your event. There is nothing to be surprised about.

Yes, yes ! As unbelievable as it may seem, many claim they can prevent rain from falling! “In the Bassa’a ethnicity, the ritual to achieve this consists in putting water in a bottle, then place it close to fire or in a pile of hot coals. After this, you can peacefully attend your event,” said Pauline Ngo Matip, an elder in her 60s. She added that in the case of a burial of an elderly person for example, rain can be prevented by throwing the deceased clothes on top of a roof.

A question however remains. Does these work every time? “Truth is, it works only with faith,” says for her part Mama Pau’, a Christian lady. The bottle and fire ritual is also practiced by the Bakossis (in the Littoral region). Another elder, Hilaire who is in his 50s, talks of another practice, though not being an initiate.

Hilaire explains that to avoid that the rain ruins an event, a big fire is lit and a bottle is buried near it. “During the whole ceremony, a man is to walk around, without –the 50 years old stresses- urinating (it seem he holds the rain which should fall in his bladder),” he said. Well, it is also said that wizards can cause the rain to ruin a particular event. Of course, those who believe this…well, they believe !