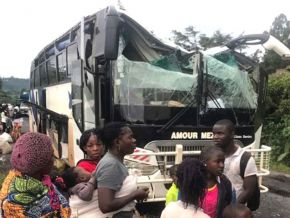 Yes, a bus driver was killed in Bamenda

Many images show that terrorist acts occur in the Northwestern regional capital.

A smashed bus, a burning caterpillar truck, a road dug and cut into two; those images look unreal yet, it is the current state of Bamenda road, between Up-Station and Santa precisely. "Amba guys blocked the road. A driver was killed by Amba guys", a journalist residing in the town informed.

He explained that the secessionists (Amba guys) blocked the road on the night of September 8 to 9, 2018. They vandalized the caterpillar and killed a bus driver. "They used the caterpillar to dig into the road and split it into two", another journalist said. Thanks to the arrival of army forces, travelers were able to safely reach Bamenda.

The following day (September 9, 2018), the Northwest governor delared a curfew which lasted from 6PM to 6AM. Let’s note for about two years now since the socio-political crisis was exarcebated with kidnappings, lootings and ghost towns, such violence scenes have become common.

"The government and secessionists (initially) demanding the anglophone part’s independence need to have a discussion. Residents’ welfare must come before the two parties’ interests ! This is Enough !", a journalist who is used to these acts of violence said outraged.