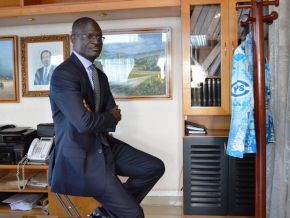 Alain Noël Olivier Mekulu Mvondo Akame, the Manageing Director of the National Social Security Fund (CNPS) is said to own many Facebook accounts

The first account named “Alain Noël Mekulu Mvondo” is a fake profile according to the Fund’s communication services. So is the second account “Noel Olivier Mekulu Mvondo”. The third one “Alain Mekulu Mvodo Akame” is also fake considering the mistake: “Mvodo” instead of “Mvondo”.

The fourth account “Alain Mekulu” is the only and real profile of the manager. The profile does not mention the official’s current position as CNPS’s MD, just the information that he studied at the college “Sacré cœur de Makak”.