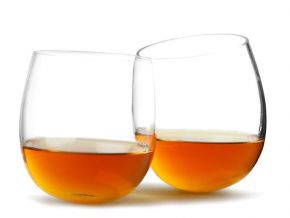 It seems that in Cameroon, a whisky bottle opened is celebrated by wet handshakes

People say that whoever opens the bottle must smear his hand with the liquor and shake hands with the audience.

Some people claim that this gesture is a legacy of traditions. The gesture is perpetuated during some major celebrations like dowry, traditional celebrations or family gatherings etc… in some cultures in Cameroon.

The master of ceremony, the host, and the head of the family or the oldest must say some welcoming words and smear his hand with some drops of the liquor and shake hands with everybody.

Romual Mbong who meets every Saturday with his friends, to spend some good times and refresh his mind, is used to the gesture. "We use to do this when we open whisky bottles. Everybody shake hands. I don't know what it really means but I suppose that it carries the same symbolism as the peace gesture in the Catholic church", he confided.

Paul Ngangue, head of an extended family and representative of the village chief clarified: "the gesture when we smear our hands with whisky and shake hands, is a symbol of peace, of solace in case there are tensions between those present. The gesture also aims to bring harmony and put conviviality in the discussions or during the time spent together."