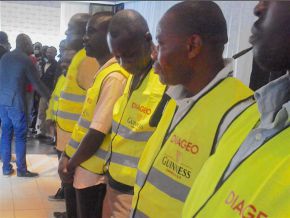 According to rumors, the subsidiary of DIAGEO does not want to employ Cameroonians anymore.

A press release published on November 9, 2017, by Guinness Cameroon, the subsidiary of the world giant DIAGEO started with these lines: “there are false allegations about the recruitment of foreign professionals to replace local employees”.

The brewing company stressed that their recruitment of foreign professionals has always been in compliance with the country’s labor law and was approved, every time, by the ministry of labor and social security. The company said that it will always be like that.

The statement then continued: “it should be recalled that the number of foreigners we employ is less than 3% of the overall employees. Also, we have decided to replace our foreign professionals who left the company, following some investigations, by Cameroonians”.

It also reminded that it has been active in the country for five decades and, it aims to be the most performing, most reliable and respected company in the sector of consumer goods. Then, Guinness concluded that it intends to achieve this by developing the potential of employees and by striving to work according to the highest standards of ethics and good governance.