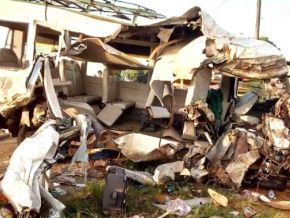 No, the accident on Kribi-Edea road killed 4 not 19

Rumors suggest the accident that occurred April 8 on the Kribi-Edea axis killed 19 people while the exact number is 4. The accident happened at about 5:30 Monday morning in Elog-Batindi locality, south region, after a Transcam transport bus hit a broken-down truck improperly parked on the road.

Two victims died at Edea hospital and two others at Kribi hospital, according to the transport minister Jean Ernest Massena Ngalle Bibehe. 14 others are wounded. The minister said outcomes of the investigation into the accident will make it possible to “sanction the culprits as severely as authorized by the law.” He also pointed out that the abandonment of a broken-down vehicle improperly parked on the roads is dangerous and is punishable under the Cameroonian Criminal Code.