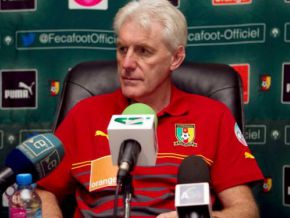 Did Hugo Broos really resign from his position as coach of the indomitable lions?

Some are claiming the coach is now training another team.

Some people affirm that Hugo Broos, coach of Cameroon’s football team, the indomitable lions, has resigned. The coach is supposedly Brazil’s new coach. Some even go as far as saying that he will be coaching Uzbekistan’s team. Denying the rumors, Cameroon’s football federation (FECAFOOT) declared on its Facebook page: “We inform the general public, both in the country and abroad, that M. Hugo BROOS is still the coach of our national football team”.

Truth is Cameroonians do not really take well that they will not take part to the 2018 World Cup in Russia as their last hope to qualify for the competition went down the drain last September 1 when Cameroon lost to Nigeria (4-0). This despite playing a draw (1-1) during the return match, last Monday at the Omnisport stadium of Yaoundé. Since then, many are after the head of the coach.

The latter, it should be recalled, took office in February 2016 and then led the team to win the last African Cup of Nations held in Gabon, in February 2017. Regardless of achieving this feat, coach Broos is now victim of many rumors, including those about his resignation. Well, he seems for his part to have accepted that he is surrounded by bad losers.