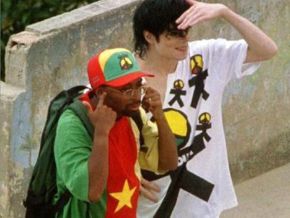 Is this picture a fake?

Some people think that this picture of the American producer is a well-edited one. True?

It is true, during the shooting of “They don’t care about us” in February 1996, Spike Lee, the American producer had worn a t-shirt with the colors of Cameroon’s map printed on it.

He was the producer and screenwriter of the song which denounces the dereliction of the oppressed and poor.

Let’s note that thanks to a DNA test, Spike Lee learnt that his father’s ancestors were Cameroonian and his mother’s were from Niger. (http://ethnicelebs.com/spike-lee).  So, he feels that he is somehow connected to Africa. The clip “They don’t care about us” also reveals that root with Black Africa: https://www.youtube.com/watch?v=QNJL6nfu__Q.

Indeed, in the clip, there are many visuals with the green, red and yellow colors which are, by the way, the colors of many African flags.