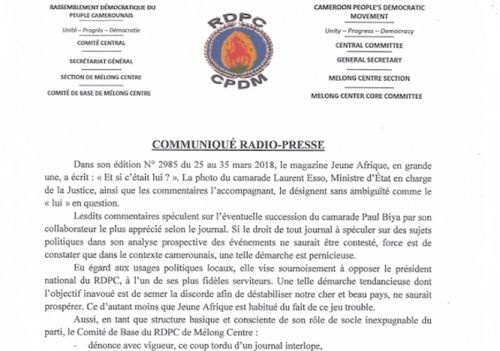 This document is not a fake

Many people doubt that this document, shared on Facebook groups and pages, is authentic.

A press statement of RDPC is being shared on the internet but many people think that it is a fake. There are two reasons for this disbelief. Indeed, it is about the 2,985th edition of the weekly Jeune Afrique titled “Et si c’était lui ?”(What if it was him). It is claimed that in this edition, the magazine wrote about the possibility of Laurent Esso replacing Paul Biya as Cameroon’s president.

Back to the reasons why people think that the statement is fake. The first one is the publication date. In the statement, it is said that: the 2,985th edition of March 25-35, 2018. Well, as everybody knows, there is no March 35 in the Gregorian calendar.

The second point is that the front page of the 2,985th edition does not mention Laurent Esso.

The frontpage story cited is just a fake. Indeed on the cover shown, it is marked “édition Cameroun” yet, there is no such edition. Jeune Afrique only publishes two editions: the international edition focused on Subsaharan Africa and the one focused on Maghreb and Middle-East.  It may happen that many articles of an edition are focused on a specific country but when the magazines do so, the name of that country is written preceded by “édition international” (édition international Cameroon for instance). Moreover, the front page of the said edition that is currently available in kiosks was consecrated to "Black Panther", the superhero film.

That being said, even though there are inaccuracies about the edition mentioned, there is no mistaking that the statement was signed on April 5, 2018, by Michel Mombio,  the propaganda and education delegate for RDPC core committee in Melong Centre. By the way, he was the first one to publish it on his Facebook page on April 11, 2018, to “support Laurent Esso”.

Let’s also mention that even though the 2,985th edition did not mention Laurent Esso, there is an article about the man published by Jeune Afrique on its website on April 4, 2018. It is titled:  “Cameroun: l’heure de l’inamovible Laurent Esso ?” (Cameroon: The irremovable Laurent Esso’s turn?)