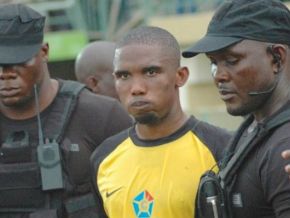 No, Samuel Eto’o has not been arrested in Nigeria

According to glonews360.com, the player was arrested following his girlfriend’s death. True?

Glonews360.com, a website well known for its fake news announced that Eto’o Fils has been arrested for “negligence causing others to die” in Nigeria.

According to the website, the former Cameroonian striker and his girlfriend (a certain Nneka Claudia, 26) were having sex on the balcony of the 5th floor of a luxurious hotel when the girl fell and died.

In fact, it is a fake news. For instance, the image that illustrates the news was shot on June 11, 2011, during the farewell match played by the Nigerian Nwankwo Kanu to bid his goodbye to international football.

Samuel Eto’o Fils and Rigobert Song were among the great players who participated at the Teslim Balogun stadium in Lagos and, Eto’o was being escorted not arrested as glonews360.com claims. The player is free.