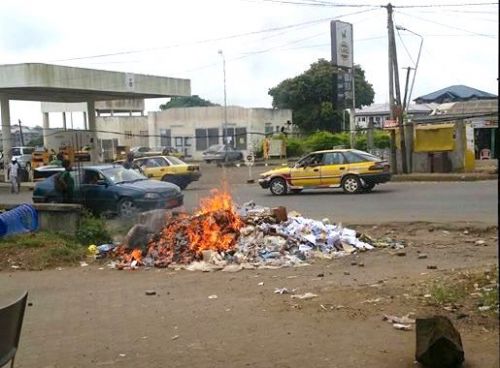 No, though Buea is dirty, Hysacam has not left the town

It is said that the departure of the company in charge of the refuse collection explains the insalubrity in the chief town of the South West. True?

Buea, the chief town of the SouthWest is covered with dirt; this is a fact. But, unlike what is being said, the company in charge of the refuse collection (HYSACAM) has not left the city. "Hysacam’s office in the region has sustained terrorist attacks during which the attackers brutalised the employees, burnt a truck and another vehicle helping in the refuse collection. The dumping service also got burnt,"  said a source inside the company who required anonymity.

The incident occurred two weeks ago. "And since, the town is woefully dirty", a resident said. "Since Hysacam is a target for attacks, the company had to take provisional and protective measures until the security situation is normalised", our trusted source informed. "This is to protect their equipment and particularly, their staff. However, they can not leave the city because they are bound by an agreement with Buea urban community", another source indicated. Meanwhile, it is revealed that the mayor of this town Patrick Ekema, urged residents to take measures to manage their refuse. So, refuse burning scenes have been multiplied there.

Let’s note that for more than two years now, the Southwest and Northwest mainly have been the playground of a socio-political crisis called "anglophone" crisis. Clashes between the army and secessionists (demanding the independence of the anglophone region) are common.