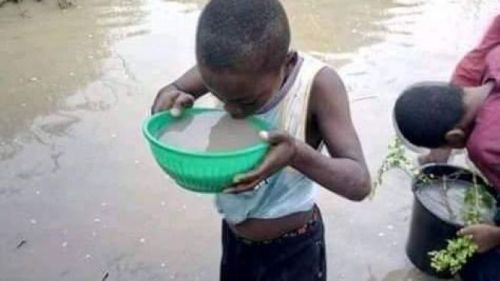 No, this picture of a boy drinking puddle water was not taken in Cameroon

A Facebook post shared more than 600 times claims that the picture was taken in Waza, a district in Far-North Cameroon. Is it true?

A publication, shared more than 600 times since December 1, 2019, on Facebook, claims that the picture showing a little boy drinking dirty water was taken in Waza, in Far-North Cameroon. “When I wake up in the morning, I don’t think about Etoudi (ed.note: reference to the presidential palace in Etoudi, Yaoundé). I think about the average Cameroonian. The one I met in Waza drinking from a puddle,” the author of that Facebook post wrote in French.

Fact is, the picture was taken in Ghana. A reverse image search on Google shows that this photo was first posted on Facebook on November 21, 2018, by a Ghanaian named Ahiabli Genuine Ernest Bishop.

“Mother of the nation, everyone in this village, Akpatoeme, in the municipality of Ketu North, is exposed to health risks because their only source of water is unfit for consumption. Please, we need your help,” he wrote in a message addressed to Rebecca Akufo-Addo, the first lady of Ghana. He also indicated to AFP that he took the picture himself.