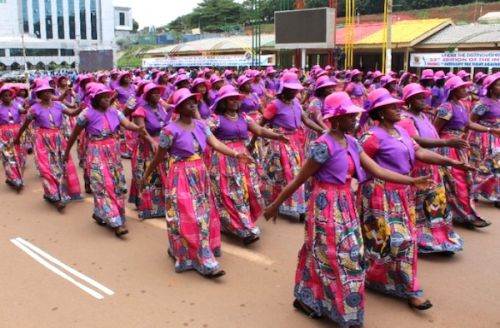 No, the 8th March fabric is not yet out

Some pictures circulating on social networks supposedly show the fabric designed for the international women's day 2020. Is this true?

For some days now, pictures of a specific fabric have been circulating on social networks. Supposedly, this fabric, though in various colors, was specifically designed for the International Women’s Day. Multiple women, including Nathalie Koah, who became famous for her relationship with football star Samuel Eto’o, are pictured on the fabric.

Tell us please, what does Nathalie Koah has to do with the 8 March fabric? Reads a post on Facebook. In response, a source at the ministry of women and families (MINPROFF) rebuked the information stating: “This is not the 8th March fabric. These are fake pictures.”

“The fabric is not officially out. It will be revealed next Sunday, on Tam-Tam Weekend (ed note: a weekly show broadcasted on CRTV) and it will be available for purchase in all of CICAM’s sales points,” the same source added. “The colors are picked by the presidency itself and they are the only ones to validate the fabric’s design. Two colors are picked and we wait for the government’s approval before starting the production.” So, unlike what is being said at the moment, the fabric for the 2020 international women’s day is “not yet out.”

“The fabric should be available before the end of January,” a source from one of the sales points of Cotonnière industrielle du Cameroun (CICAM) in Yaoundé said.

A contest has been launched to select the design of this fabric. Overall, 899 proposals have been submitted and the 10 best ideas were picked. However, they will be re-examined before the final design is selected, said the president of the committee in charge of the contest, Nathalie Célestine Nguemba, who is chief technical advisor at MINPROFF.