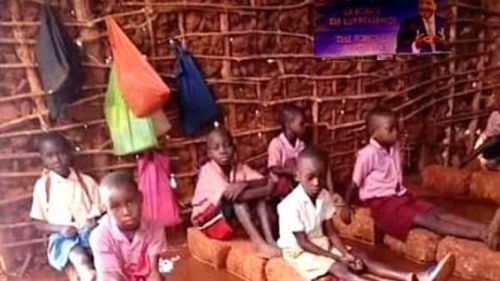 No, this picture of children in a flooded classroom was not taken in Cameroon

Was this picture being shared on social media really taken in a primary school in Cameroon?

In a picture being shared on social media, Whatsapp particularly, pupils are seen sitting on blocks in a flooded classroom. In the background is a campaign poster used for the candidate Paul Biya during the October 7, 2018, presidential elections. This is to make believe that the scene depicted by the image happened in Cameroon but, this is not the case.

This picture was taken at Mangororo primary school at Ganze, Kilifi county in Kenya. Reverse search shows the image on many Swahili (national language in Kenya) and English websites. Pesacheck.com, an East African fact-checking website, dedicated an article to this image on May 9, 2019.

According to the website, the picture was taken after the pouring rains in that region. Deputy Teddy Mwambire, representing Ganze constituency, published the original picture on his Facebook page. In the original picture, the campaign poster seen on the picture being shared in Cameroonian spheres is not present. The deputy informs that more than 30 schools are in a more desolating state.

NTV Kenya, a Kenyan entertainment website, also published a video report about the flood in Swahili. The video published on Thursday 9, May 2019, has been seen some 540 times. We learnt recently that the deputy Aisha Jumwa donated tables and benches to Mangororo primary schools after the picture was published.