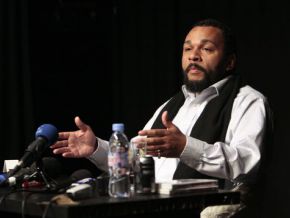 The title of the show performed by comedian Dieudonnée Mballa Mballa is inspired by an American pro-Israeli organization.

In 2014, comedian Dieudonnée Mballa Mballa presented a new show: “Asu Zoa”. “Asu Zoa”, which means “the head” or “the elephant's forehead”, depending on the translation from Eton, Manguissa or Ewondo, all languages spoken by the Beti people of Cameroon.

Some critiques accuse the comedian of using double-talk. “Asu Zoa” is apparently an anagram of USA ZOA, acronym of Zionist Organization of America, the oldest pro-Israeli organization in the USA.

In truth, just based on the title of the show, “Asu Zoa” in Beti culture is the name given to a great priestess of a protection rite against malevolent forces.

In the book, Femmes du Cameroun, mères pacifiques, femmes rebelles (Women of Cameroon, peaceful mothers, rebel women), written under the supervision of Jean Claude Barbier, it is a rite about force and fertility reserved for women, called Ngas. During this rite, the priestess suspected of “evu”, in other words “seed of meanness” or “witchcraft” must prove her innocence by felling a banana tree with one machete strike. If the tree does not fall after the first hit, she must start again then confess her crimes. She then goes through the purification rites.

If however the banana tree falls after the first strike, she could then efficiently preside over the protection rite for herself and her sisters.