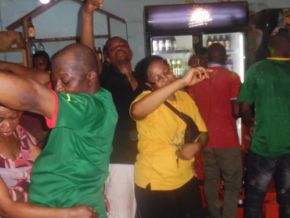 Is there really a petition online protesting noise made by bars in Cameroon?

It seems internet users are protesting noise pollution by bars in the country. True?

Since last Monday, a petition has been issued online to denounce noise pollution by bars at night in Cameroon. To date, 154 people have signed the petition which comes from Olivier Madiba, head of video games studio, Kiro’o Games. The young entrepreneur explains his motivations on this platform where the petition is available:

Olivier Madiba denounces in the petition the noise made by a bar near his house. “We are Sunday, 00h40, and I can’t get ready for my week, all because of a bar at 400m from my place which is still opened and making some hellish noise,” he says. Well, all Cameroonians can feel the youth’s pain and visualize songs such as “Dans la sauce”, by Reniss, or “Zeke Zeke”, by Atango Manadjama, played in the night making a lot noise.

Let’s recall that in 2013, the Syndicat national des exploitants de débits de boisson numbered 6,000 bars in Yaoundé only. Given this, it is sure that noise pollution in the Cameroonian capital has reached unbearable levels. A phenomenon which Roger Tapa, president of the previously mentioned syndicate, is well aware of.

However, Tapa claims to have not known about the existence of a petition to deal with the noise issue. “Really? There is petition?” he questioned when told about it. Interested by the move, and eager to know more, he said the a campaign would be carried out to raise the awareness the members of his association, at the "end of this month", regarding the noise issue.

As for Olivier Madiba, he plans to address the petition to the government, President Paul Biya, and the Douala and Yaoundé Urban Communities (CUY and CUD).