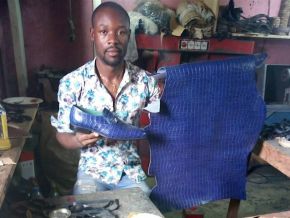 It is said that this pair of shoes was made in Europe and that the amount used to buy would be enough to build a hospital in Cameroon. True ?

Much to these shoes owner and maker’s chagrin, the pair has been the object of harsh comments this weekend. It is true, these shoes belong to the president of Cameroon’s national assembly Cavaye Yeguié Djibril.

However, unlike what the rumors claim, they were not made in Europe. They are the creation of a 28 year old Cameroonian by name Mbe Jean Colince, promoter of the MJC Shoes brand. In the premises of his small company at Mvog-Ada in Yaoundé, he recounts his story.

First of all, he explained that he was sorry one of his employees posted a picture of the shoes he made recently, for the president of the national assembly, on Facebook. This picture was quickly noticed by political activists and other users who claimed that it was worth a million and with this amount, hospitals could be built in Cameroon.

But no, Jean Colince said with a sad grin “a pair of shoes made by us cost CFA50,000 on average. It could cost much more than that according to the material required by the client . However, it is always far from the million CFA!”.

The young man met Cavaye Yeguié Djibril in July 2018 during an event at the public square of the national assembly. “During the event, the authorities visited my booth and I took the opportunity to present my creations and to create connections”. That is how the first order from Cavaye Yeguié Djibril came in. After that one, another one came in and, this is the one actually making waves.

The young entrepreneur fears that this buzz would affect his business because there are many officials in his customer base. He created his own business two years ago after training with some master shoemakers in the country and, convinced that elegance depends on the quality of the shoes worn, he wishes to prosper in that business.